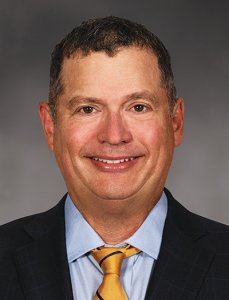 Adam J. Altman, MD, a Cataract/Lens Implant, LASIK, and Fellowship-trained Corneal Specialist, was the first doctor in Berks County to perform laser vision correction, and he has successfully performed thousands of these life changing surgeries. Dr. Altman joined Eye Consultants of Pennsylvania (then West Reading Ophthalmic Associates) in September 1995. Dr. Altman received his undergraduate degree with Honors in Economics at the University of Massachusetts at Amherst, Magna cum Laude, in 1980. In 1984 he worked as a researcher at Harvard Medical School’s Massachusetts Eye and Ear Infirmary where he was first author on several original Eye Surgery publications. He received his medical degree from the University of Massachusetts Medical School with numerous honors in 1985, graduating in the top 10% of his class.

He performed his ophthalmology residency at the world-renowned Duke University Medical Center in Durham, North Carolina from 1986 to 1989. In 1989 he served as Chief Resident of both the Durham and Ashville Veterans Administration Hospitals.

His formal training in refractive vision correction surgery came in 1989 and 1990 while he completed a Cornea and External Eye Disease fellowship at the prestigious Wills Eye Hospital in Philadelphia, Pennsylvania. He was certified by the American Board of Ophthalmology in 1990. In 1992, he co-founded the Refractive Surgery Service at Wills Eye Hospital. He served as an Assistant Professor at Wills Eye Hospital from 1990 and joined our practice in 1995. Dr. Altman was elected President of Eye Consultants of Pennsylvania in 2005.

Dr. Altman was awarded a Cornea and External Eye Disease fellowship at the prestigious Wills Eye Hospital in Philadelphia, Pennsylvania, graduating in 1990. The facilities that Dr. Altman trained at (Massachusetts Eye and Ear Infirmary, Duke University Eye Center and Wills Eye Hospital) are all ranked among the top six eye surgery training programs (out of 150) by US News and World Report. He was certified by the American Board of Ophthalmology and National Board of Medical Examiners in 1990.

During his career, Dr. Altman has been active in clinical research. He has enjoyed mentoring other physicians and teaching them the finer aspects of Cataract Surgery and Bladeless LASIK, both in the United States and around the world and during humanitarian medical mission work in Mexico and Kenya.

He served as an Assistant Professor of Ophthalmology, Cornea Service at Wills Eye Hospital and Thomas Jefferson Medical Center, and in 1992 was one of the co-founders of Wills Eye Hospital’s Refractive Surgery Service.

Dr. Altman performs Laser Vision Correction, (Bladeless LASIK) on site at the Pennsylvania Eye and Ear Surgery Center using the excimer laser to correct for nearsightedness and reduce or eliminate the need for glasses or contact lenses.

Dr. Altman is an active member in the following organizations:

As the son of a University Professor as well as a grade school teacher, Dr. Altman sees his role as a teacher as well as a surgeon to his patients, recognizing the importance of modern diagnostic testing, explaining the results, as well as discussing the various medical and surgical options available in order to pick the one that can best treat their particular situation. If surgery is recommended, Dr. Altman is dedicated to providing the highest level of service to his patients and achieving the best possible results for their medical and surgical care.